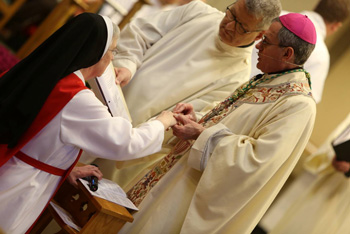 “For it was you who formed my inward parts; you knit me together in my mother’s womb.” Psalm 139

I was first called before I was born, before I was in my mother’s womb God had plans for me. He started by giving me wonderful parents Jean Raymond and Lucille Gagné. They were the ones who took care of me and nourished, me body and soul.

My mother was a caring and sympathetic person who was always ready to help or to give a hand to anyone who needed it. She was always thinking of others before herself. My father was a hard worker strong and yet gentle of heart. He had great confidence in God and trusted everything and everyone to him. He enjoyed life to the fullest. He had that “ Joie de Vivre”.

I have two older brothers, Roger and Patrice, they were my guardians. They were there to protect me and take care of their little sister. We enjoyed each other’s company. They showed their love by teasing me and pestering me, just like it should be.

I was Daddy’s little girl until my two younger sisters, Rosemarie and Claudette came along. I loved my two sisters very much and I tried to guide them and protect them. We had a lot of fun together.

In my early childhood, things were very peaceful and life was good. I had made some good friends where I was born in Temiscaming, Québec. When I was 9 years old, my parents decided that we should move to a smaller town, Bonfield, Ontario. That was their hometown. I was very sad about the move because I knew I would miss my friends very much.

Once I started school, I made new friends and all was good. I also believe that God was tugging at my heart. I can remember one day as I would often did stop to go into the Church (Ste. Philomène, then but is now known as Ste. Bernadette) I looked at the big Crucifix and realized or understood the Love of God. I can remember saying to myself, “He really loved us, He really loved me” I was only nine at the time. I would often attend Mass during the week and Patrice would serve Mass. I always enjoyed going to Mass.

I used to walk with my grandmother to church and we were very close. I can remember a time when she babysat us she wanted to do something for us so I said: “Could you make an apple pie.?” She was very happy to make it and it was the best pie of course. I guess that is where I developed the taste or interest in baking.

At the age of 15, I can remember being in church when I felt the love and warmth of the call of Jesus. I wanted to enter into the congregation of the Sisters of the Sacred Heart. But the Superior felt that I was too young and wanted me to continue my education and get some life experience. So I did.

I became an educator for the elementary schools and I traveled, enjoyed life, bought a house, and settled down in a little town called Sturgeon Falls, Ontario. I always wanted to visit Medjugorje ever since I heard about them in 1982. Every Summer I would go on a 5-day pilgrimage to Québec. One year, before leaving I asked Mother Mary if all was possible I would really like to go to Medjugorje. Well, that evening the group of pilgrims stop at a restaurant and these two ladies asked if they could join us. So we started talking and then one of the ladies told us that she was looking for someone to go on a trip with her to Italy, the Republic of Czechoslovakia and Medjugorje. Well, when she mention the name Medjugorje I said I would love to go with her. I always wanted to go and Mary answered my desire.

So in a couple of months, I was off to visit the place where Mary apparently appears. To me, it was a beautiful experience that changed my life. I was compelled to pray much more. When I came back also I would talk about my trip and one day while driving in the car with my sister and her daughter, Dominique who was 10 at the time said to me “Tante Louise it is not too late” to enter and become a religious. Well, that sort of gave me food for thought. So coming back to my home I decided to take a year of discernment with Père Denis Pion, SJ. In Sudbury. I went through the St Ignatius exercise and decided that if I was going to enter into a contemplative community I would have to do it soon, for I was 56 at the time.

So I began applying to different communities in the Province of Québec because I spoke French and wanted to be in a french environment. But as soon as I told them my age they discouraged me and turned me down. St. Hyacinthe suggested that I apply to the Sisters of the Precious Blood in London since I could speak in English.

So that is what I did. I wrote to Sr. Eileen Mary asking if I could come and visit to see if this is where God was calling me. As the other Congregations had asked I also have to give my background to Sister but I also included the name of Père Denis Pion, SJ and told her that she could talk to him. So she invited me and I came to London on October 13th for a visit. As soon as I entered the Monastery I felt that is where I belong. The peace and love that I felt could not be any other the Love and Peace of Jesus that I felt in my heart. After six weeks I had to return to my home. But I had decided that I would come back. So while driving on the highway, I said to God: `If this is where you want me you will make this happen fast. So on the 26 of November, I returned home and put things in order. I sold my house, my furniture and my car all in a couple of months. And on January 21, 2008, 2 months after, I returned to London and started my life as a Sister Adorer of the Precious Blood. God kept his word and made things happen very fast!!

I know that God has brought me here for His glory and praise. He has been so good to me and I thank Him every day for His blessings.

Although I started my Religious Life much later in life, I cannot say that I wasted my time before entering. The experience that I had in life enriched me with so many gifts and understanding; that the experience and work that I did was in a way preparing me for this community. I can only see that when we look back in our lives. I see where God had a hand in what He wanted, by moulding me and or forming me into the purpose into where I could serve Him so much more.

God is good and wants only what is best for each and everyone of us. Amen.

Want to join the discussion?
Feel free to contribute!